We left Maryland Yacht Club on Friday, October 5th heading for St. Michaels about 30 miles away.  Unfortunately, our late start (12:45PM), light winds, and squally looking skies had us changing our plans and looking for a closer quiet anchorage.  Captain Tom spent more than an hour below researching a new location on the fly; thank you dear!  We ended up motor-sailing up the Chester River on the eastern shore of the Chesapeake Bay.  There is a large Wildlife Refuge on the east side of the river.  Really quiet place!  All the way up the river Tom kept asking, “How’s the cell signal?”  Anita would check her phone that was plugged in near the helm station.  Answer: 3 bars; a bit further up the river, 2 bars; upon entering Reed Creek, MD, 1 bar.  However, once at anchor “No Service” and it is 4:45PM, too late to choose another location.  Tom was able to send out a position report to immediate family to let them know we were out of touch for a night.  The blog will have to wait!

This was a very beautiful anchorage, nice big bay only one other small moored boat in it.  A few big houses on shore and a small creek or two nearby.  The evening was spent researching our next location without the use of the internet.  That means look at a chart and try to find a town, with roads near shore, and perhaps the label TWR; which may mean cell tower.  Tom described the next port as having a very narrow mile long channel with 4 foot draft (our minimum required) and having to pass under two bridges.  One fixed bridge with 10 feet extra of mast clearance and one that was an opening bascule bridge; the opening is reported to be 48 feet wide (um, we are 22.5 feet wide). Tom particularly liked the anchorage beyond the bridges as there was a boat launch where we could tie the dinghy and walk to West Marine and a grocery store. Anita responded with a hesitant, okay.

The morning was a time to work on projects.  Tom finished fixing the broken cockpit seat and he installed the new ladder bracket in the port forward storage area.  Yeah, much easier to get in there now!  Anita repaired some stitching on the cockpit enclosure, prepared and cleaned up from meals and did a bit of reading.  We discovered two more boats had joined our quiet anchorage in the late morning. Right after lunch we motored south down the Chester River toward Kent Island.

On the way in the narrow channel, we discovered the depth was a bit deeper than reported, whew, that’s good!  Lot’s of small power boat traffic here, absolutely no other sailboats.  Anita’s thinking, “Let the Adventure begin, this is out of my comfort zone.” After winding around a few corners the view final opens up and the bridges were VERY close together, like 500 feet maybe. There was a 1 knot current against us and we had a 25 minute wait until the next bridge opening. It was actually easy to maintain station by powering forward and drifting back with the current.  Once the bridge opened, we had to let one small sailboat going down-current go first.  We followed another boat into the channel from our side.  Then saw just how narrow that opening was, oh boy, and there are dolphins (a grouping of vertical wooden piles shaped like a teepee) inside the opening to close it up some, yikes!  The boat wakes were bouncing off the solid walls; great more turbulence.  Anita pushed the throttle ALL the way forward (never did that before) and quietly swore like a sailor, then prayed her thanks we made it through okay.

Picture: Looking back at the two bridges; the narrow opening of the lower bridge is the tiny light blue area in the center of the picture, above the O in Lone Star.

We still had a few more miles to go winding around in a marked channel, then following chart depths into Goodhands Creek, MD.  There were about six other anchored and moored local boats here and a bit of traffic from small trailerable motorboats and fisherman. It’s also Columbus Day weekend.  We are right next to a very tall cell tower and have full cell service, yippee!

On Sunday, we took the dinghy ashore and walked a couple miles to West Marine and a SafeWay grocery.  We found Talenti ice cream on sale – 2/$6, and bought too much other stuff,  so we used UBER to get a quick ride back to the boat launch ramp.  Well worth it! 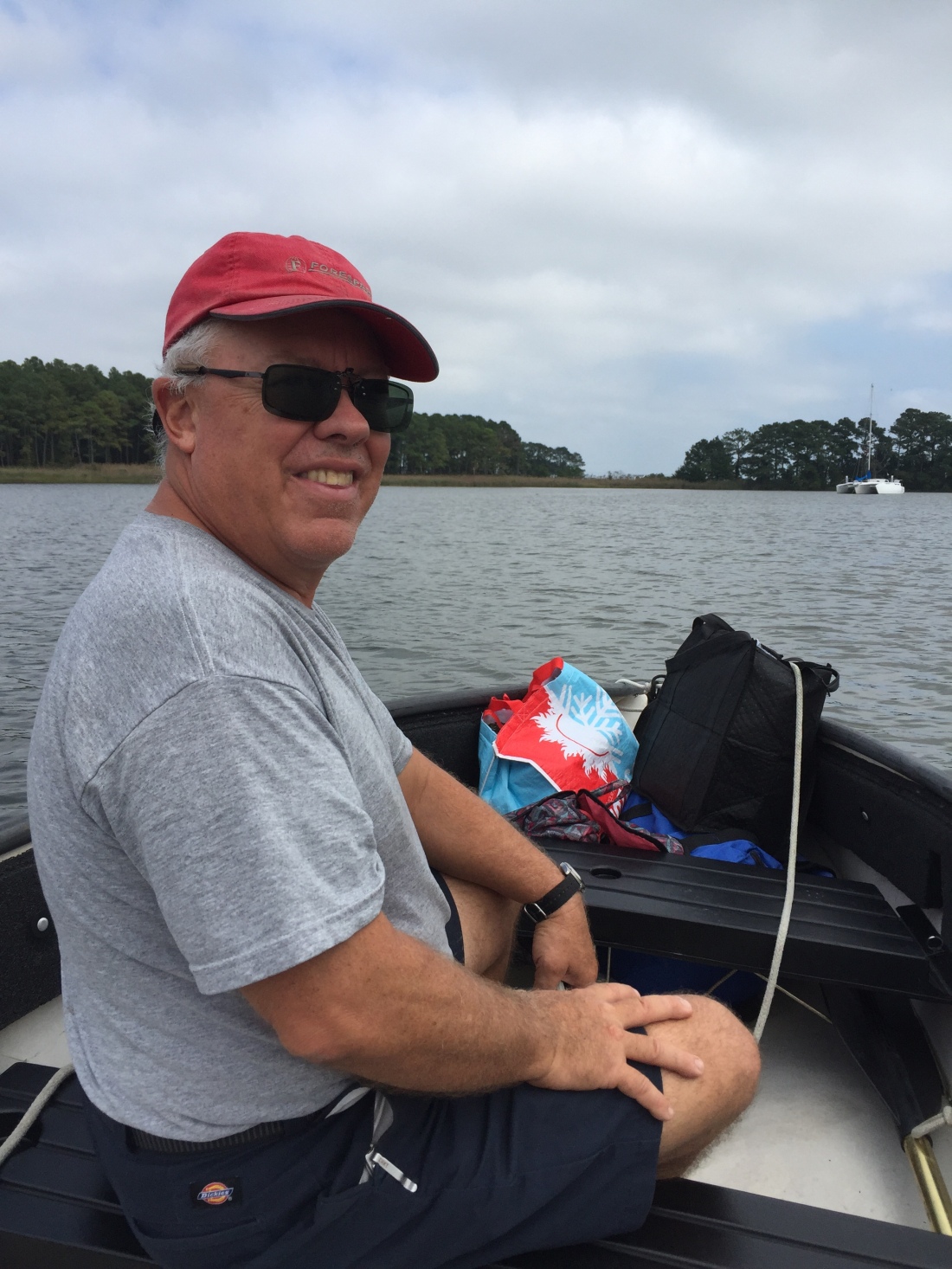 We had purchased chicken and pork chops so took out the new Weber propane grill and had us a feast.  We love to grill large quantities than cut it up and package in vacuum sealed bags to store in the freezer for later use.  Time consuming now, but well worth it later when making a quick stir-fry, casserole, or perhaps sandwiches.

Today we finished up a quick project with our current anchor before leaving for St. Michaels.  We have 30 feet of chain and the rest rope.  We needed to replace two shackles with one new one and swap ends of the line.  We tend to use about 50-80 feet of the 240 feet we have.  Tom had spliced a new thimble on the new chain end of the line last night after dinner.  While Tom worked on hardware replacement, Anita measured and moved the anchor line markers to read correctly so we will know how much line we have out.  Once the new anchor windlass is installed, we will put on a bigger anchor and new chain and line.  Yes, the windless and new anchor are on the project list too.  We love that we can get more done when we are on the boat full time.