We made an exception the morning we left Fishing Bay in Deltaville VA; we woke to an alarm clock at 6:00 AM.  Then readied ourselves with warm oatmeal, hot drinks and layers of warm clothes. Then Tom hauled the anchor just before sunrise.  We wanted to take advantage of the early morning winds for our last trip south in the Chesapeake.  As the day wore on the winds diminished.   We motor-sailed to maintain boat speed of over 5 knots.  The southern part of the bay narrows, there are strong currents, tugs and barges, BIG container ships, and many fishing vessels.  After alternating 2 hour watches all day, we were both on deck for the last two hours.   We motored all the way up the Hampton River and anchored across from Hampton Public Piers along with four other boats. 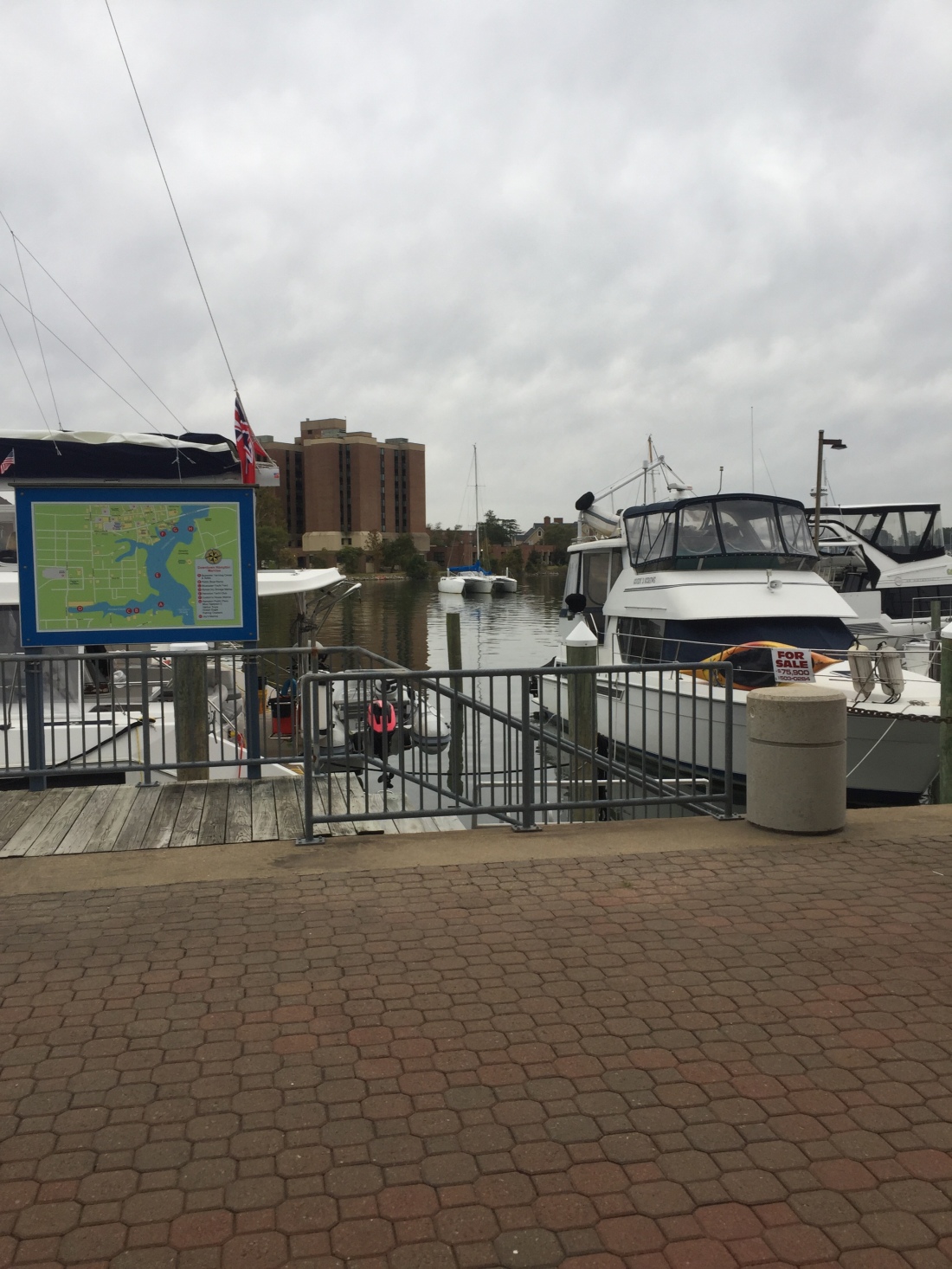 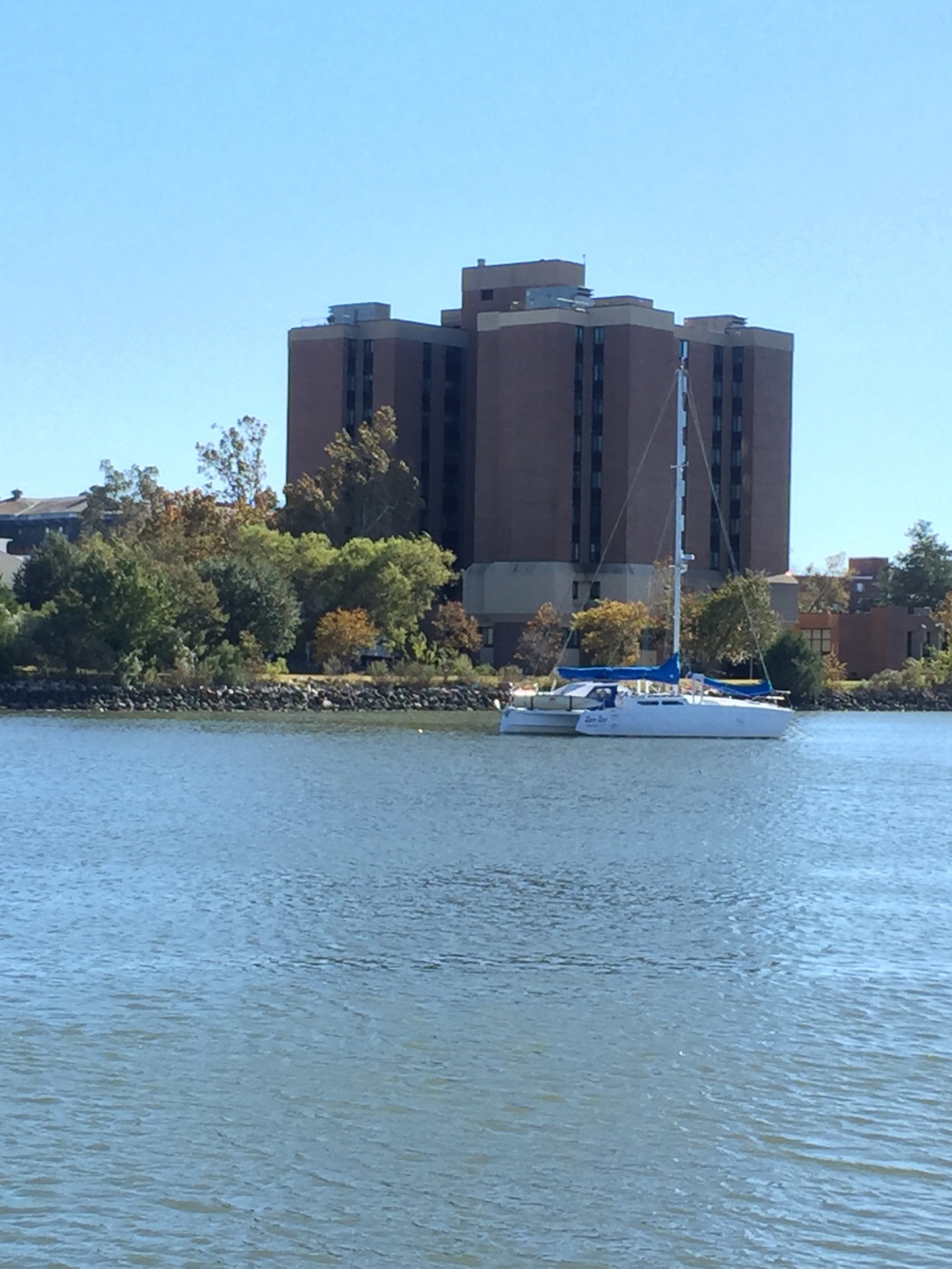 A side note here to explain the process of researching and choosing our next destination.  We are sailing to places we’ve never been before.  First, we check the weather using at least 4 different applications (Intellicast website, Predict Wind, Storm, and Windy) or the weather radio on the VHF when there is no cell service.  Knowing our weather window, we estimate how far south we can travel in the given daylight hours.  Next, we research locations within that distance using online and paper cruising guides.  Finally, Tom researches our likely destinations on Active Captain, a crowd sourcing app that cruisers use to rate and discuss harbors.  We have one other valuable source of information.  Fellow yacht club members and friends, Dan & MaryAnn Crouch have shared their logs of the past 7 years of sailing Cutting Class to FL and the Bahamas.  They are already in Florida this year!

Active Captain had told us there was room for 3-4 boats across from Hampton Public Piers.  Before heading up the river Tom called to verify there was room for us and there was.  The irony is a few storms have brought a lot of wind and this past weekend 11 boats were anchored here for the Nor’Easter.  The highest winds hit us between 10PM Saturday and 1AM Sunday.  We ended up staying up until 1AM as three boats were dragging their anchors and attempting to reset them in heavy winds, rain, and thunderstorms.  So glad our anchor held!  The small monohull on our port side that dragged had no engine so was getting a tow from another dinghy.  It took them two hours and at least six attempts at setting and hauling the anchor to get it to hold.  The much larger monohull on our starboard side gave up and moved way down river after 5 or more attempts.  The next morning, the 47′ catamaran that was now close in front of us dragged and reset his anchor.  This one made us the most nervous as he has a lot of exposed surface area (more windage) and if he dragged it would be into our three bows (we’re a trimaran).  Well we made it through that storm and another blow here, all is well.

We are very close to downtown Hampton and many conveniences are near.  We are taking this opportunity to receive mail and packages, do laundry, stock up on food, boat supplies, and prescriptions.  On Monday, we walked 2.7 miles to a super Walmart and used Uber to get back.  Today Tom borrowed a bike from the Marina as he had to go in multiple directions to pharmacies and a small hardware store.  We do carry a folding bike on board, but borrowing one saves time and energy.

Tom has started the next big project – installing the ham radio, tuner, and antenna.  All will be located in, or through, the aft cabin which we currently use as our storage area.  The first task was to empty out the cabin so he could install a ground system under the large bunk.  The ham radio also functions on the Single Side Band frequencies and will be a source for weather information as well as communicating with the cruising community and friends and family once we are outside the U.S.  Tom studied Morse code and radio intricacies, took the Ham test in St. Thomas in spring of 1988 and received his call sign; N1FUN, while we were on our first cruise onboard Sundsvalla.  He’s looking forward to being on air again soon.  Any other ham radio users out there?  What ‘nets’ do you listen to?

Installing the antenna by sliding it up the aft stay was very difficult. The casing had to be spread and much force applied. Tom first tried from a bosuns chair, then hip harness. What finally worked was removing the stay (after replacing it with a halyard) and tying it down next to the mast. 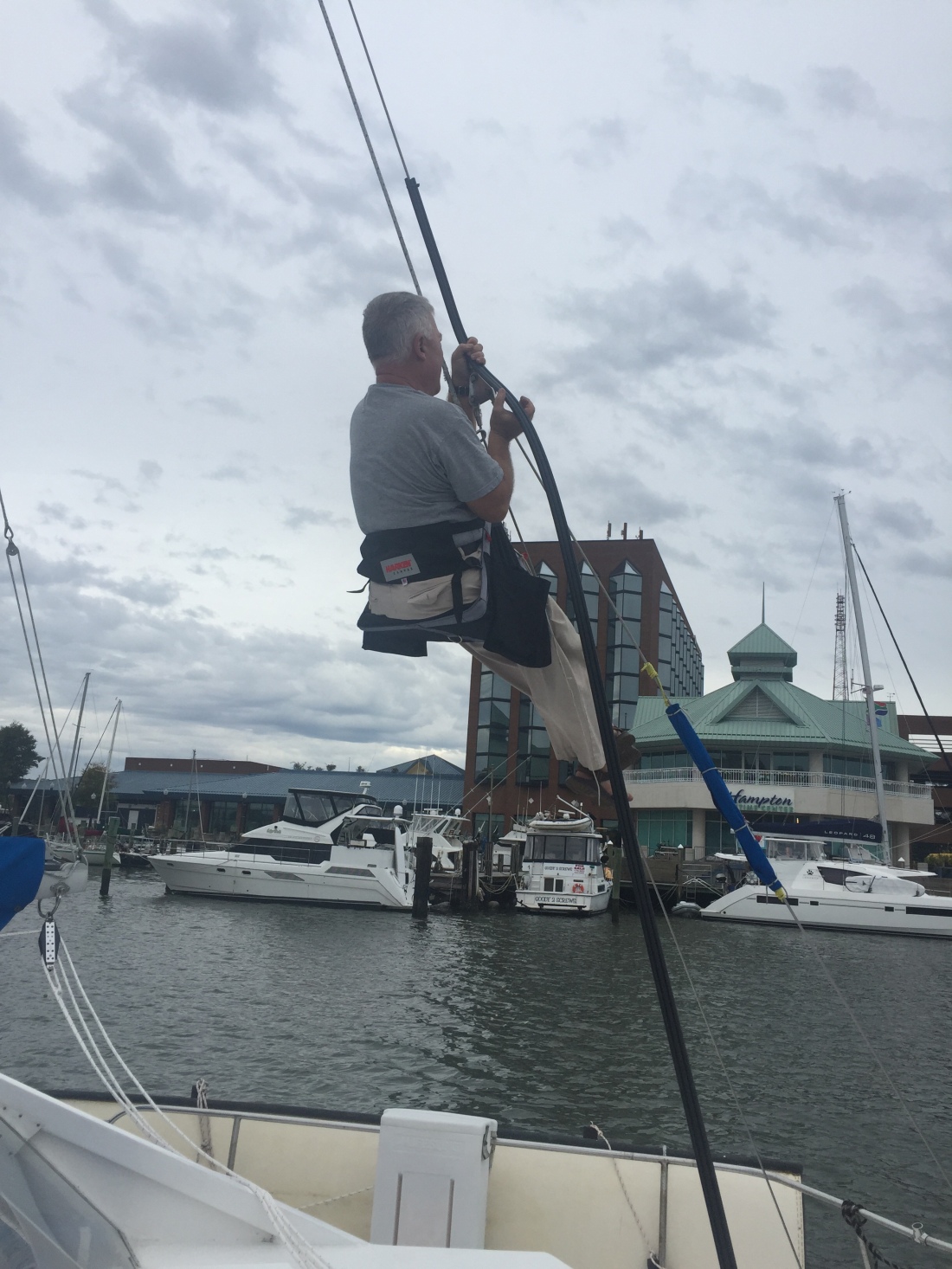 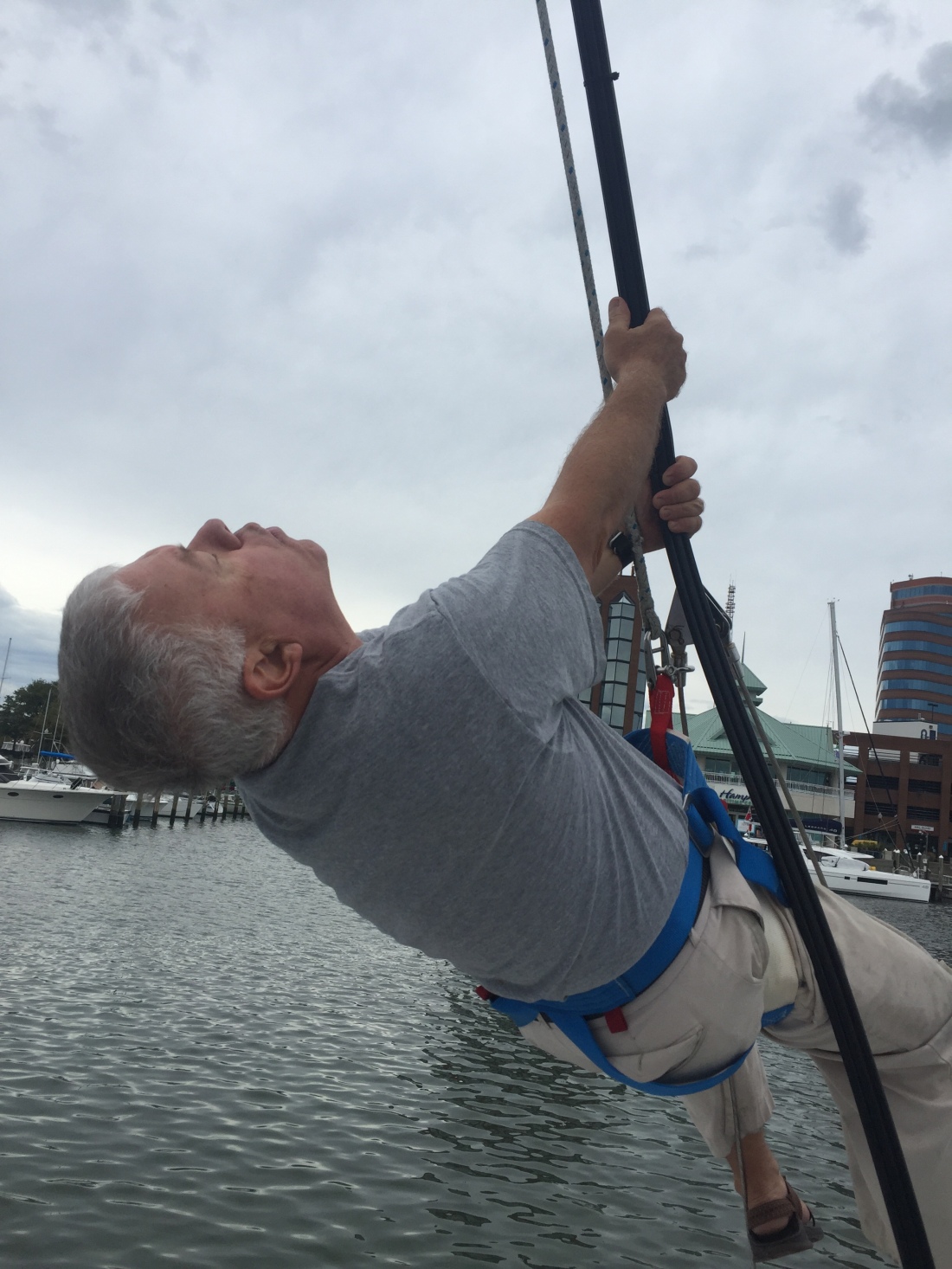 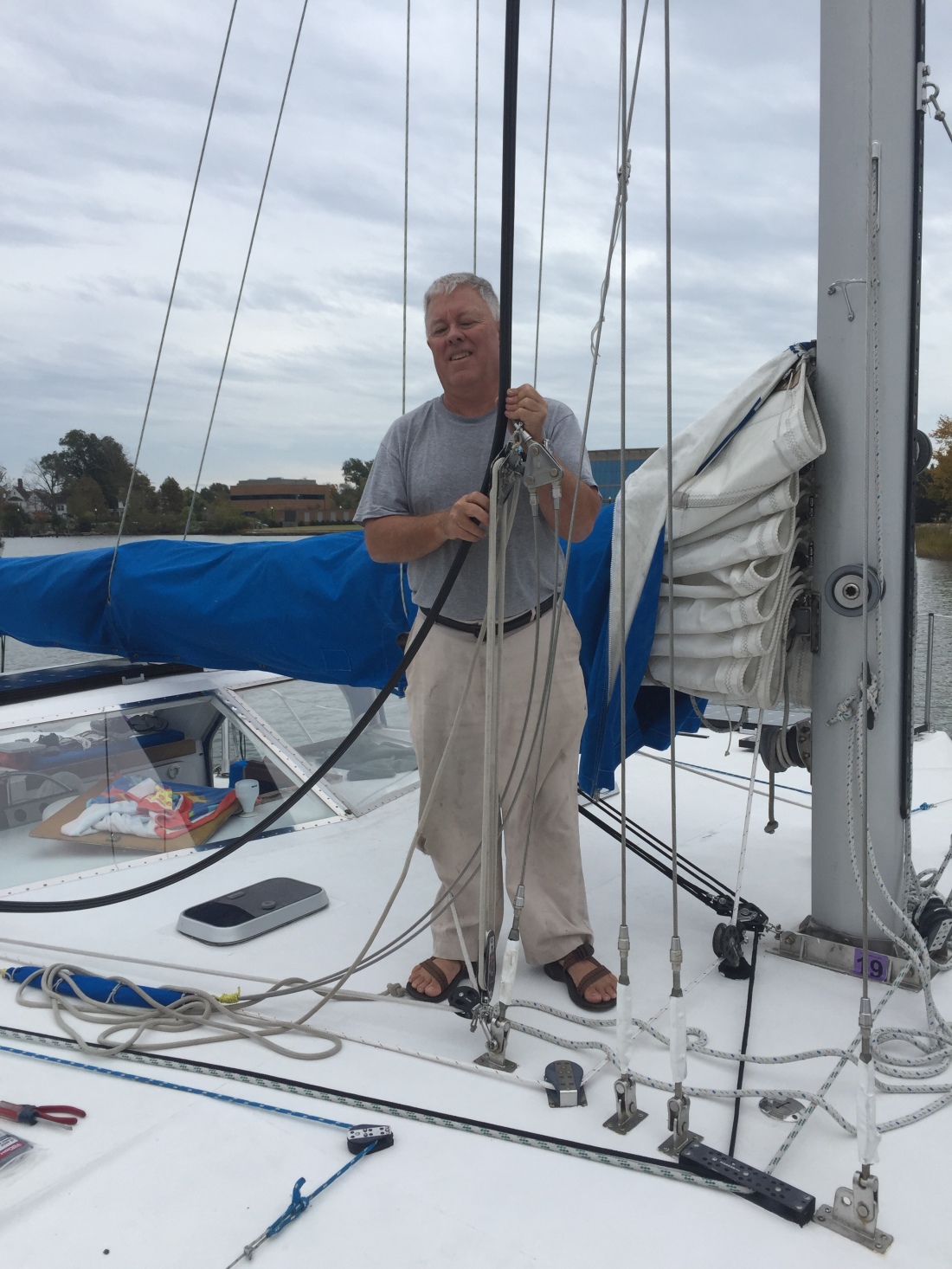 Saturday, we took a half day to visit the VA Air & Space Museum. It was educational and fun. Great displays and awesome volunteers; lunar module simulator engineer and a ham radio operator were memorable. The view of the harbor entrance from the rooftop was beautiful: 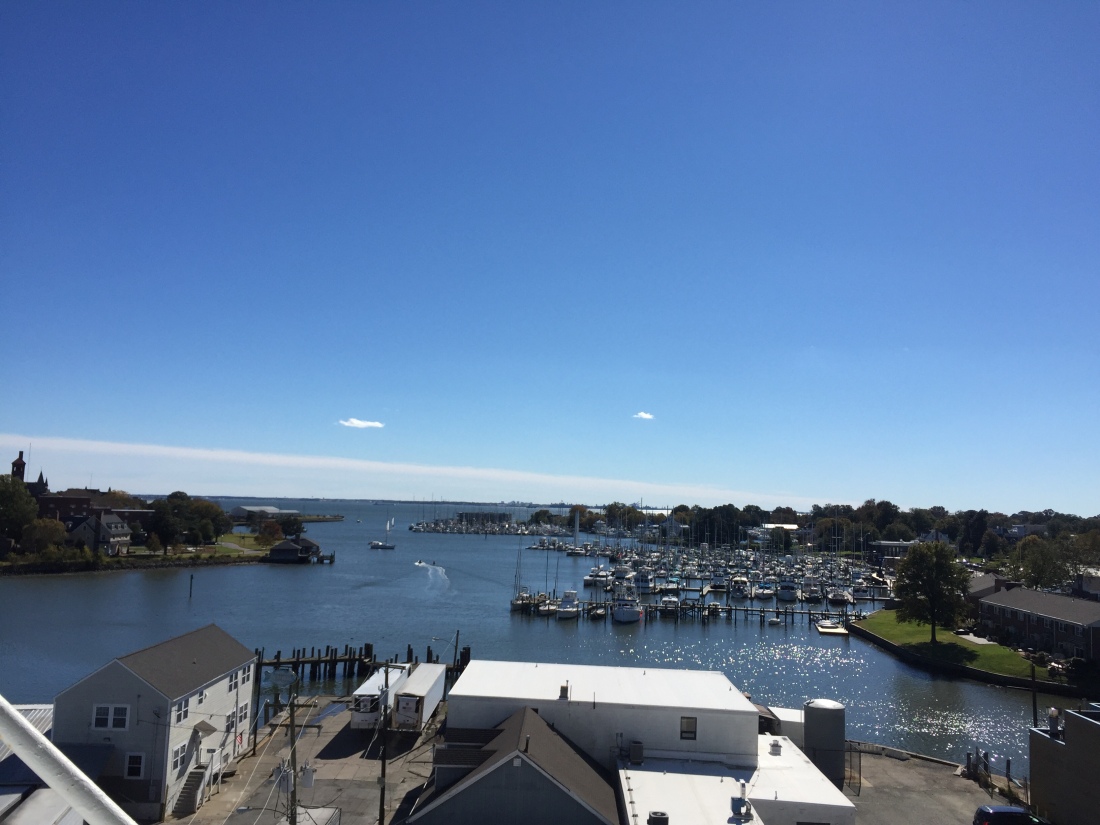 One thought on “Hanging Out in Hampton, VA”