We set out from Beaufort, NC at 6:30AM November 29th. Motoring out the inlet into the rising sun with many dolphin and sea birds playing along side us with clear skies and cold: air temperature – 31 degrees Fahrenheit, sea temperature – 61. Once clear of land, with sails and auto pilot set, we both took out our phones to text or call farewell to family members before we lost the signal. Thank you all for your positivity!! We know we scare you sometimes with our ocean adventure, but we are thankful for your support and understanding. We promise to keep in touch often.

Offshore we both wear an inflatable life vest and harness. We tether ourselves to a jack line that runs fore and aft on the boat whenever we leave the enclosed cockpit. That only happens for sail changes or deck checks. Not often! We alternate who is on watch every four hours and try to ensure the off-watch person does not contribute to meal making or cleanup as they should be resting. Our freezer and fridge were topped up and included some homemade meals that were easy to use.

By 2:00PM the same day we were in the Gulf Stream as evidenced by the change to sea and air temperature (on left in picture)

Our heading was not directly south (180) as it is best to cross the northeast flowing stream at a right angle to get to the other side as fast as possible. It was after dark, around 8:00 PM when we reached the far side and turned straight south.

By the end of the second day, the wind changed from light and behind us to moderate (10-15 knots) right in front of us. So rather than heading straight south we had to steer southeast further out into the Atlantic.

We timed our watches so that Tom would be on watch for the 7:30AM and 5:00PM SSB checkin with Chris Parker at Marine Weather Center. He would give the weather for our location and projected location 12 and 24 hours out.

There was one time we needed to go about 50 miles further south to avoid bad weather. We just didn’t make it in time. Just before sunset we elected to stop our forward progress into the ever building seas and attempted to heave-to (bows into the seas, slow drift backwards). We did not have the right sail combination so ended up dropping all sail and laying sideways to the seas. We are not sure how big the seas got as it was a very dark night. We estimate 12 foot seas. They would occasionally break over the deck and shove us side ways hard. It was an elevator ride! Winds were gusting around 30. By morning it had calmed down enough so we raised the jib and motor-sailed for the next 5 hours or so, until we could raise more sail and cut the engine. We were joined by a large school of playful dolphin at this time again very uplifting to have them play around Lone Star.

We sustained steering system damage during this blow. The boat is more difficult to steer. Thankfully, the auto pilot can still handle the boat. Tom checked the internal steering system under the aft bunk and all appears normal. Best guess is that the steering quadrant slipped on the ruddernn shaft. We have approximately 300 miles to go to our preferred destination of Georgetown on Great Exuma.

The seas steadily diminished and we were making progress southeasterly once again. At this point we were heading for the Dominican Republic and wondering if we’d ever get to lay our course southwest to the Bahamas? We made short tacks to the west on three occasions to avoid going too far to the east.

Yes, we have made it to southern waters! Here’s proof: flying fish that land on deck at night. 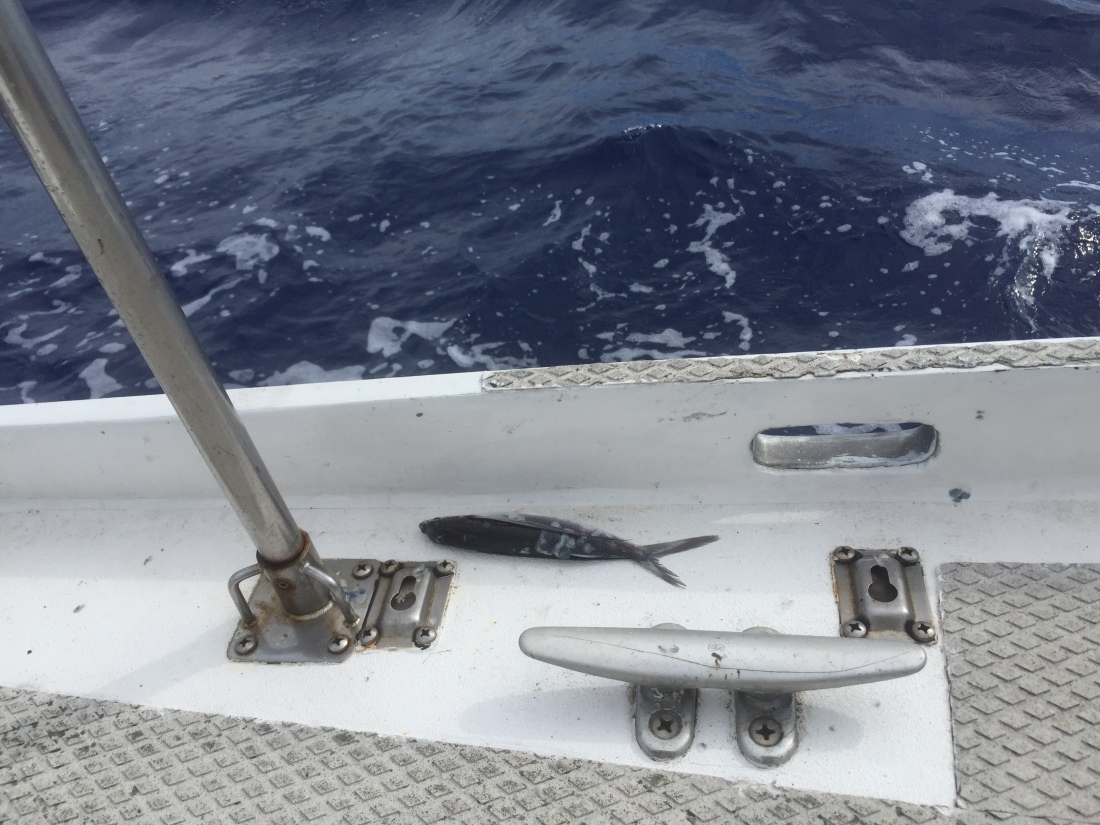 A large cold front covering the entire east coast of the US finally gave us the winds we needed. Well the right direction anyway, of course a bit strong (25-30 knots). We reduced sail to just the jib and sailed the last two days nearly dead down wind in 8-10 foot following seas. Well not quite following: as we were at the bottom end of the front the winds were clocking around from NW-N-NE. So of course the seas were coming from multiple directions as well. Another elevator ride!

The last night at sea: 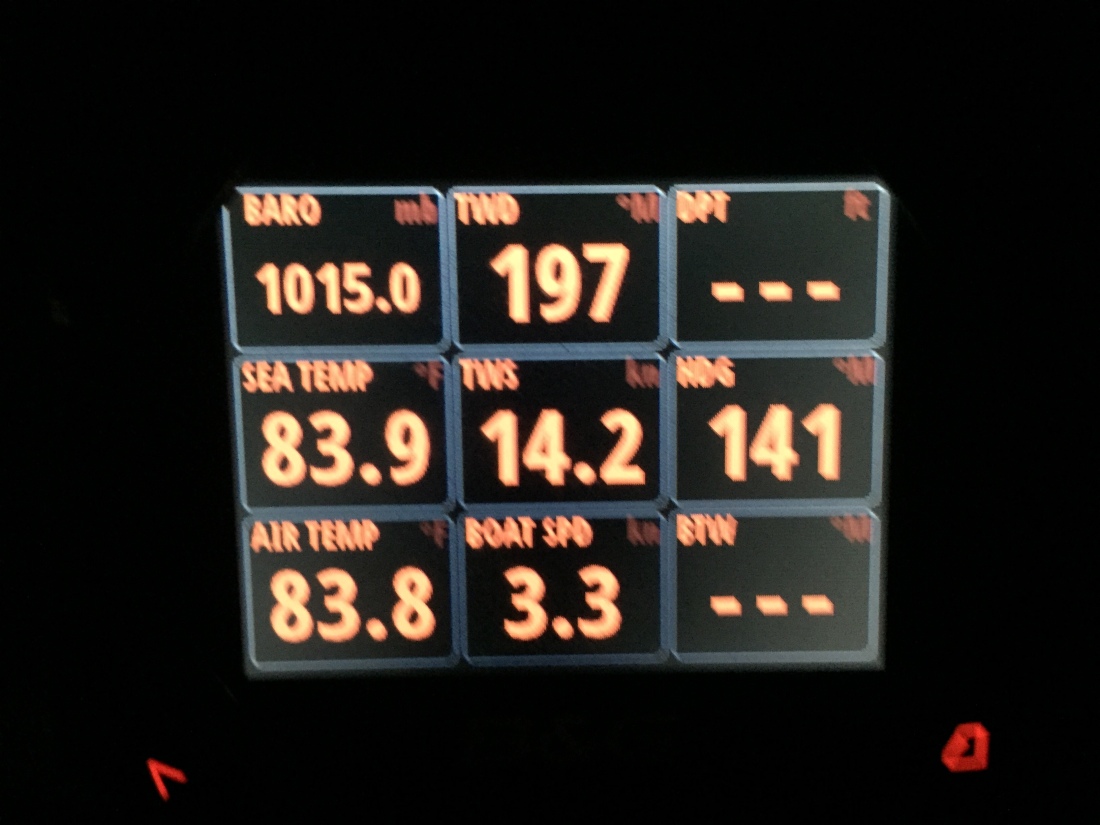 The helmsman seat is on an arm and held in place by a stainless-steel pin. Unfortunately, the pin sheared in these big seas. Tom was able to make a temporary repair, but this will require some metal work to fix it properly. It’s a boat, maintenance is expected.

The downwind sleigh ride continued right into Conch Cay Cut where we needed to make a sharp left turn. So relieved to get past the first few islands and behind the bigger ones to get away from the rollers.

We anchored across from Georgetown off of Stocking Island at 9:30AM Friday, December 7. Amazingly three dolphin jumped over our anchor line as Tom was paying out the line!

We made it to the Bahamas after nine nights at sea. We think we sailed almost a thousand miles, 300 more than if we’d been able to sail straight south. We arrived exhausted, but oh so happy to have escaped winter and made it to these beautiful islands.

The day flew by as we covered the sails and stowed some gear. It took a while to get our phones connected. Then we informed family we arrived safely. After grabbing a bite to eat, Anita collapsed for a nap. Tom researched how to check in to Customs and Immigration. However, it was too late in the day to go once he finished with his nap. We will stay aboard until Monday when the offices open again.

Our cruising neighbors have stopped by in their dinghies to welcome us and we were welcomed on the morning VHF net so have learned a lot about the great cruising community here. We look forward to checking in tomorrow and joining in the fun soon!

4 thoughts on “Passage to the Bahamas”