Footnote to add to my last blog: We really enjoyed our three day stay in Oriental, NC. The Inland Waterway Provision Company was a favorite stop of ours every time we went ashore. They have an awesome selection of healthy provisions; I could and probably should have spent a small fortune there. They also have a section dedicated to consignment sales of nautical equipment. We were so happy when they offered to sell our 12’ Porta-Bote for us!

On Tuesday, November 20th we motor-sailed down the ICW to our next destination. We anchored off Moorehead City hoping for one more night of visiting with Pegu Club, but they ended up exiting the waterway onto a shallow bank and were too far away for a dinghy ride. We look forward to catching up with them again in the Bahamas. The next morning, we left at the same time they did, crossing each other as they kept going south and we motored 5 miles east to Beaufort, NC. As tears formed due to this farewell, blurring my vision, dolphins jumped out of the water ahead of us. That brought an instant smile and a soothing feeling that we will cross paths again!

We stayed at Beaufort Docks Marina for 4 days to provision the boat for the next six months. Thank you to cruising friend Marcia on Cutting Class for tips on what to stock up on before heading to the Bahamas! The Marina offers loaner cars for their guests which makes it much easier to shop around town. Their cars are old, but they run. We went to a super Walmart, a hardware store, Piggly Wiggly, and Food Lion, and we had a spare propane tank filled. We spent nearly $1,000 on provisions and filled a lot of nooks and crannies on the boat. Just before leaving the dock we also filled up the diesel and water tanks. Tom had one last task to prepare the boat: change the oil in the engine. He discovered we should buy more engine oil. On Monday, we set out walking together. Anita stopped at a salon to get her hair cut and Tom continued on to the Auto Parts store for 2 gallons of oil. We met up again for the remainder of the walk back to the boat.

Every Thanksgiving evening the Backstreet Pub hosts a gathering and feast for cruisers and locals. They provided two turkeys: one smoked, one baked, a baked ham, mashed potatoes, and stuffing. Locals and cruisers provide the rest. I brought a cabbage salad and some chocolate fudge. 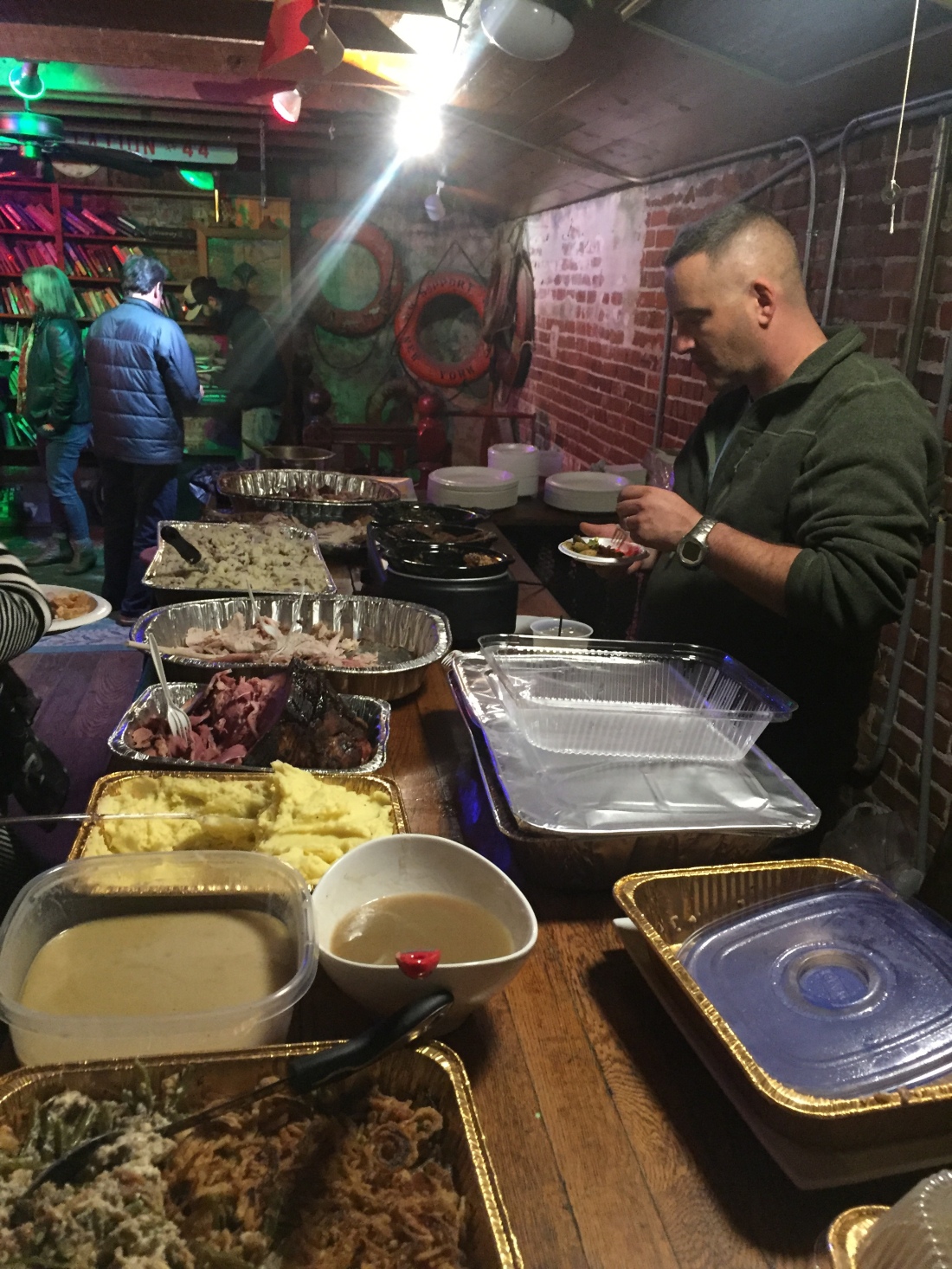 It was a very yummy and abundant feast and fun to meet both locals and cruisers.

The weather has been a real challenge during this part of our cruise. When we arrived here my first task was doing laundry at the local laundry mat as my winter wear was dirty. I brought about a weeks’ worth of winter clothes and had already stretched that a bit. I did laundry again just before we left as the same occurred. We’ve experienced lows in the 30’s and highs in the 50’s with lower wind chills. We had two gales while in Beaufort; one at the dock and one at anchor. Luckily, we have a good diesel heater to keep the cabin warm. It’s been used so much we actually needed to clean it again. We have been listening to Chris Parker from Marine Weather Center on SSB and subscribed to his weather routing service for our upcoming passage to the Bahamas. This will allow us to speak directly with Chris and his team twice a day to update our location and get advice on course corrections.

One detail we were not able to complete before leaving CT was to sell my 2015 VW Passat. We had advertised twice on EBay Motors with no interest. We called the dealer we bought the car from and they were interested in seeing it. A big thank you to our son, Alex for bringing it to them and finalizing the sale! That’s a big relief to not have it sitting around in a cold New England winter unused. We’ll rent a vehicle when we fly or sail home for visits.

The last bit of preparation before leaving the country was to secure international medical coverage and medical evacuation insurance. Better to be safe than sorry. We are both healthy and do what we can to stay that way.

Our departure was delayed a few days due to Tom getting sick. He had head cold symptoms, but the illness only lasted 3-4 days. It was probably a mild flu as energy loss was also a symptom. The night before we left Anita started showing the same symptoms. The weather window we had included a downwind stretch for the first day or two followed by southerly (SE-S-SW) winds for the next few days. We elected to go when the winds were favorable to cross the gulf stream and leave on November 29th. We informed family of our plans and provided links to the Ham Radio Waterway Net that posts our reported position each day and a link to Chris Parker who also records our position twice a day. We are ready to head south by the faster route, out into the Atlantic, and south to the Bahamas. We really want to escape winter!!