We were a bit skeptical about sailing to Nassau after hearing that 80% of the Bahamians live there and the crime rate is high. However, we were pleasantly surprised at how friendly all the local people we engaged in conversations were. The majority of the Bahamian people are very kind and friendly. It is, more importantly, an international airport hub from NY and the reason we decided to go there.

The day after Alex and Jenna left we bagged all the laundry and took the dinghy to Junkanoo beach. We hauled our 10 foot Porta-Bote way up beyond the high tide mark and locked it to a railing where local merchants hawk their wares later in the day. It’s also where the taxis hang out waiting to give tourists a tour. The mile long walk to a very large laundry facility was up a long gradual hill. Tom commented that this laundry was well thought out for its purpose. It had great ventilation, large aisles, and hundreds of machines, all in working order! We enjoyed a much easier walk back although the bags were still heavy. That afternoon we moved the boat a mile east to be closer to the big grocery store we walked to and from. Once again loaded down with too much to carry. We seriously need to find a cart with big wheels! We walked more than five miles today and carried a fair bit; our arms and necks are weary.

Has anyone heard of cruisers midnight? Many cruisers adopt the clock of the sun, like farmers we rise and rest early. Consequently, 9PM seems like midnight. By moving a mile east, we had escaped the throbbing musical entertainment at Junkanoo beach which ends at 1:30AM, half-way into our sleep cycle. Now we were anchored in front of Atlantis Park to the north. They had an easy listening live band that started playing in the early afternoon. Around cruisers midnight, that was drowned out by a dance club on the south side of the river and, you guessed it the noise blared until 1:30 AM. Who needs sleep?

The next morning we hoisted the anchor at 7AM and left Nassau. We sailed close to the wind for 11 hours; hand steering for the first 4 as we were too close to the wind for the electric auto pilot. We were so relieved to get out of the rocky seas by entering Alabaster Bay. Unfortunately, we were greeted by all too familiar loud Bahamian head banging music complete with a lot of foul language this time. Thankfully the entertainment ended at 9:30 PM. Ah, finally a good night sleep!

The next day Pegu Club sailed into the harbor from Rock Sound. We gathered on Lone Star for a fun game of cards and cruise planning as we are both heading north.

We enjoyed a two hour walk the next afternoon with Jeff and Kimberly. We wandered across the island and around the remains of a World War II military base and to this beautiful pink sand beach.

Then back to this view of our snug and beautiful harbor.

We shared a slow-cooker beef stew and biscuit dinner followed by fresh brownies (thanks to K&J) and a good sailing spy movie: “Riddle of the Sands”, on Lone Star.

The next day we sailed in company with Pegu Club from Alabaster Bay to Royal Island Harbor at the north end of Eleuthera. It was real nice to get a first hand report about the conditions in Current Cut from Kimberly via VHF radio. It was much easier than we anticipated! She even took pictures of us right after we came through the cut.

We stayed aboard our boats, visiting each other occasionally, in the nearly enclosed private island harbor of Royal Island for four days.

South winds above 20 knots were prevalent throughout this time. Luckily, only the last day had rain squalls. The south winds would have been great for continuing on to the Abacos except for the accompanying waves. The early morning when the wind was at its peak Anita got up several times to check our position. At 4AM we had 3 boats in front of us, at 5 we had only 2. One had dragged their anchor and ended up well behind us. No idea how it didn’t hit us, but very thankful! There was no one on board that boat or 2 others anchored nearby. We did meet the owner two days later, just as we were hauling our anchor to head to Spanish Wells for a few days. He asked us,”Who moved my boat?” We told him the wind and a dragging anchor. He and his family were staying with a friend on a nearby island for the storm. He was very lucky he sustained no damage.

Spanish Wells is a lovely, well decorated, colorful and clean town. On Easter Sunday we walked the beautiful north beach for miles. 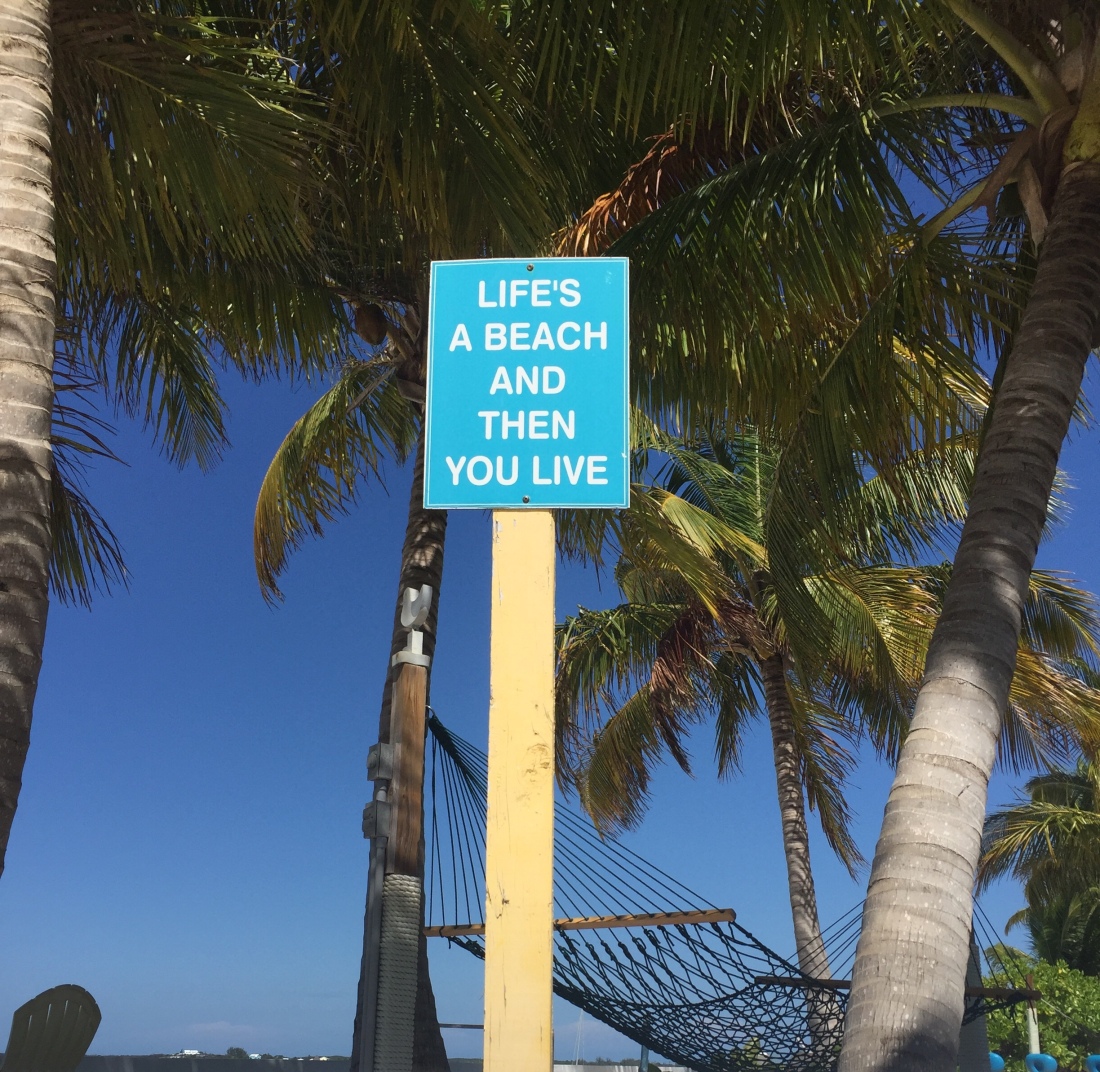 A couple days later we spotted these dolphin as we entered the harbor.

How’s this for a front lawn? 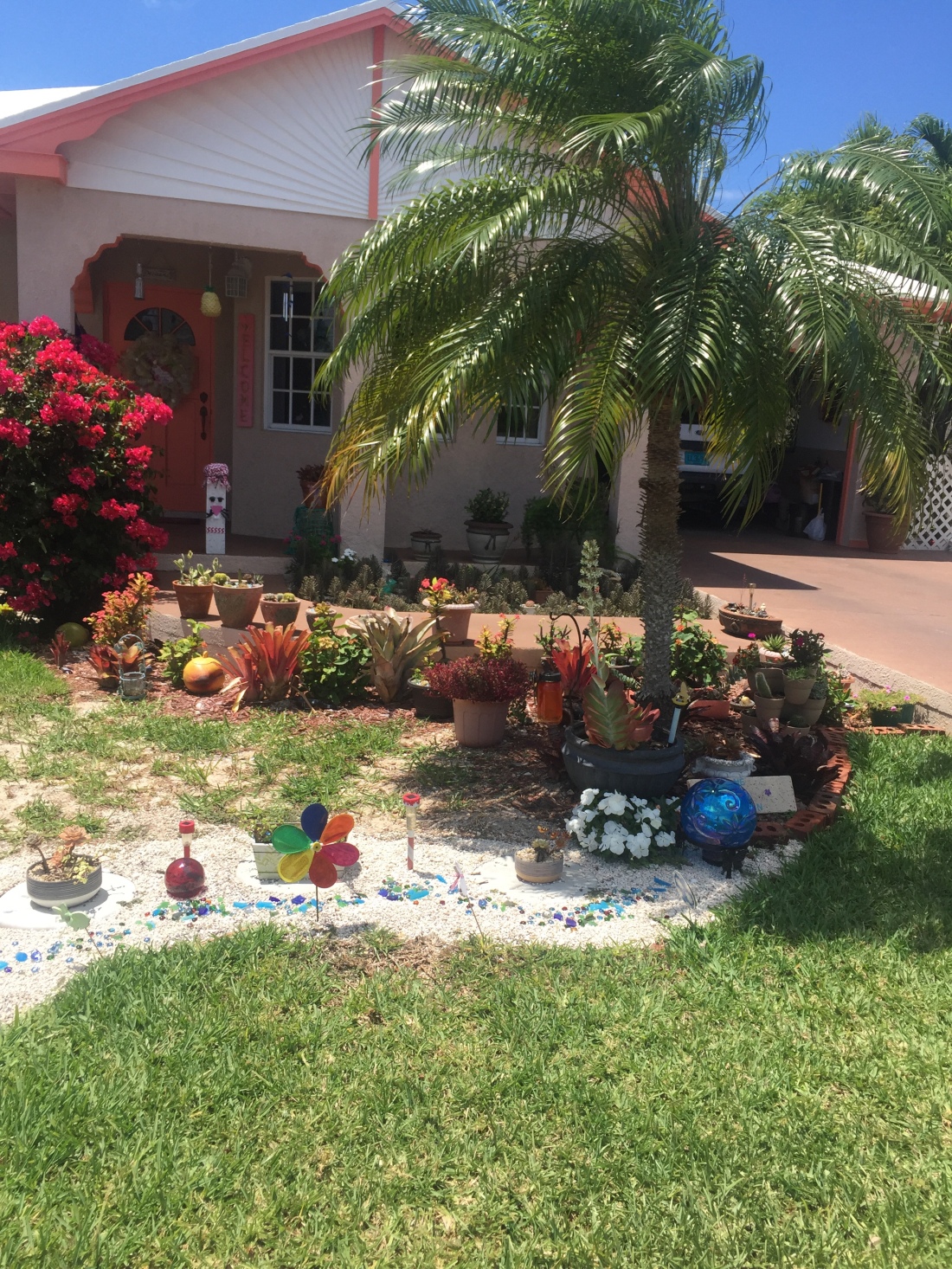 Tom is enjoying the challenge of installing the used WindPilot self-steering. He disassembled and cleaned everything before installing. Rigging lines and tuning to ensure it will steer in any weather. Haven’t attached the wind or water blades yet.

We mentioned wanting a cart to Kimberly and she suggested the folding versatile Burley bicycle trailer/hand cart. Tom found one on eBay and we won the bid! It will be in CT waiting for us. We have decided to go back to SYC this summer. We plan to arrive in June. Anita’s current project is restocking the freezer with homemade meals for the upcoming passage.

Next up: heading north to the Abacos.

2 thoughts on “Nassau and Eleuthera”