Skip to content
Sailing on Lonestar Company on board, Passages November 21, 2019 3 Minutes

We left Beaufort, NC at 9:45AM on Sunday, November 3rd. Clear blue sky, almost 60 degrees, 10-15 knot ENE winds. Forecast for the next 3-5 days was for light to moderate winds generally behind the beam, nearly perfect sailing conditions for heading south.

This time there were three people to stand 4 hour watches on Lone Star. With 8 hours off between watches it was almost too easy. 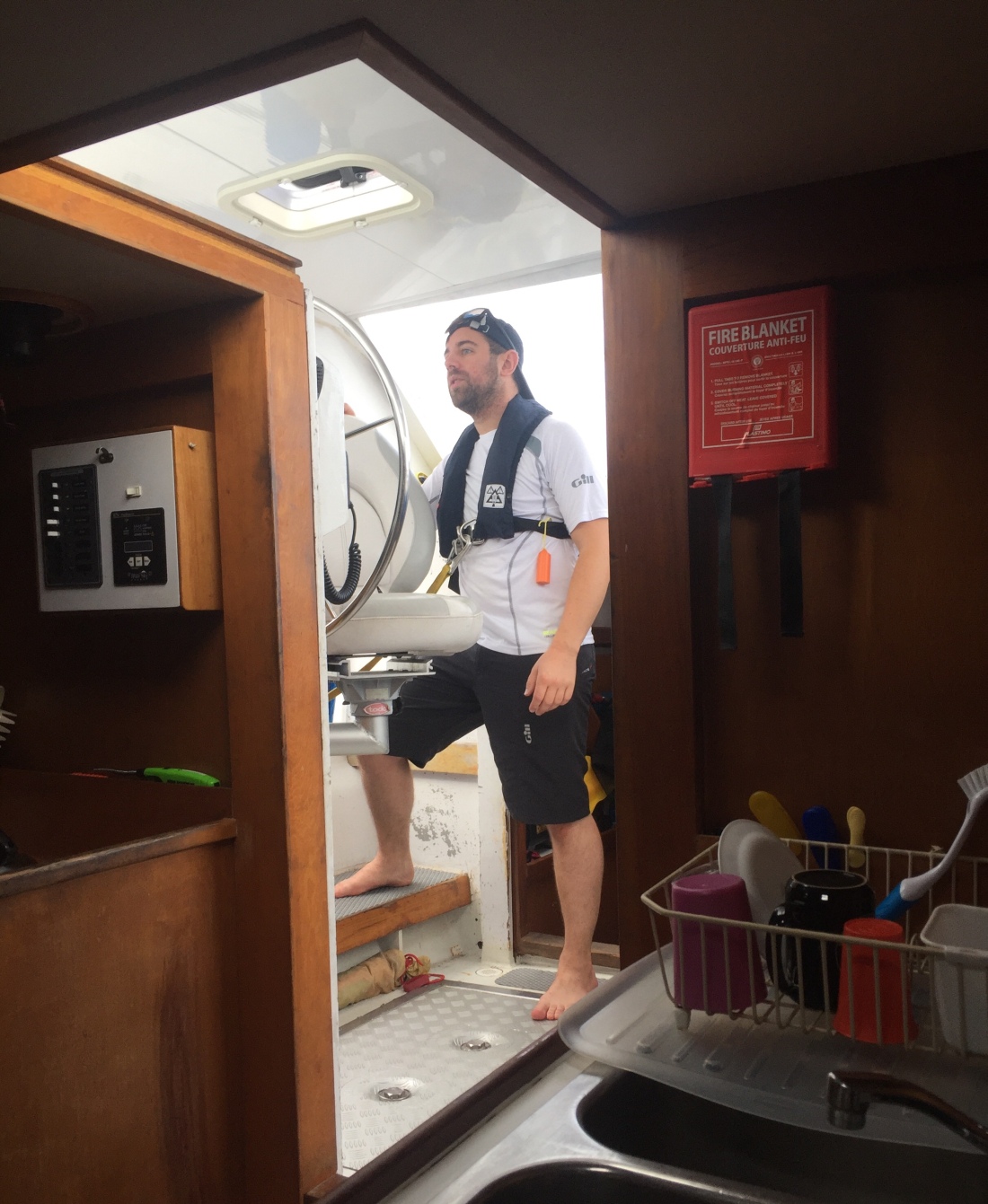 When anyone is on deck they are tethered to the boat, our deck naturally slopes toward the sea. Rolling off is not allowed, haha.

We reached the Gulf Stream before sunset the first evening. It was a little bouncier here and the wind slowly veered from a reach to on the wind, then it died down for a couple hours. We motored as needed and made it across around daybreak on Monday. The stream was an unusual 90 miles wide this year, though the fast running part was only about half that.Video courtesy of Brian 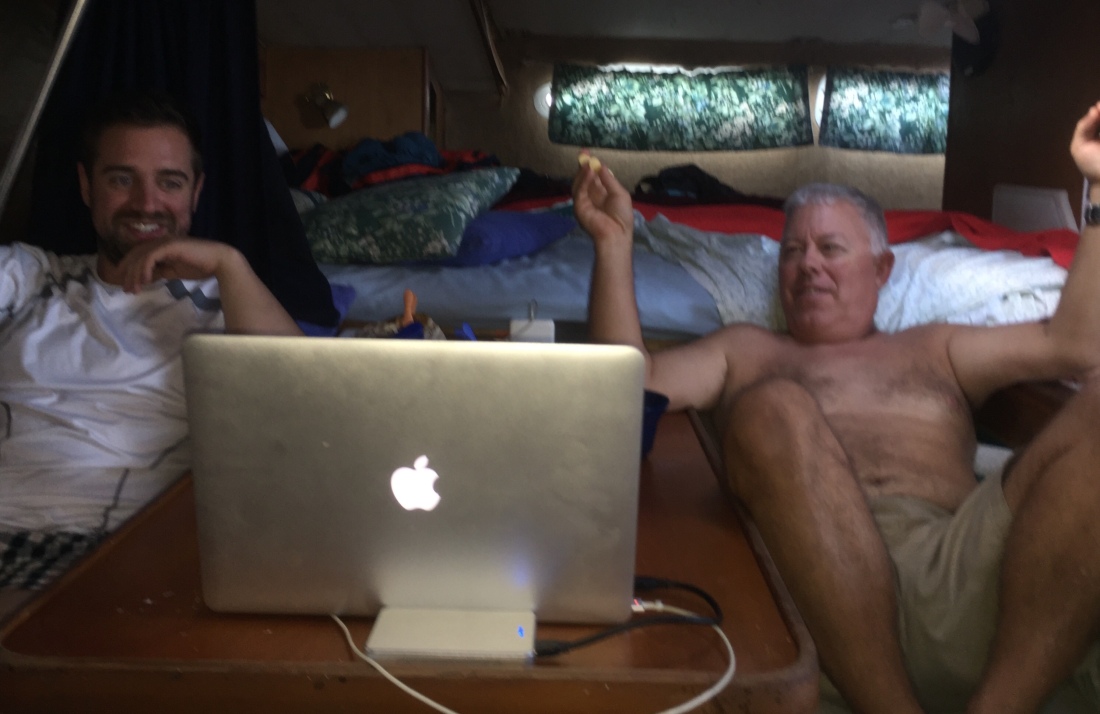 Movie watching, they also enjoyed a game of Barricade and some Cribbage too!

The WindPilot, now called Herman, dons a purple ribbon in light winds to react quicker; it works! Everyone liked using Herman, he’s a lot quieter than the electric autopilot now called Greta. Can you tell we had a German resident on board to name our helmsmen?

Our passage was blessed with beautiful sunsets, some clouds now and then, and a waxing gibbous moon. Not a lot of star gazing, but some. 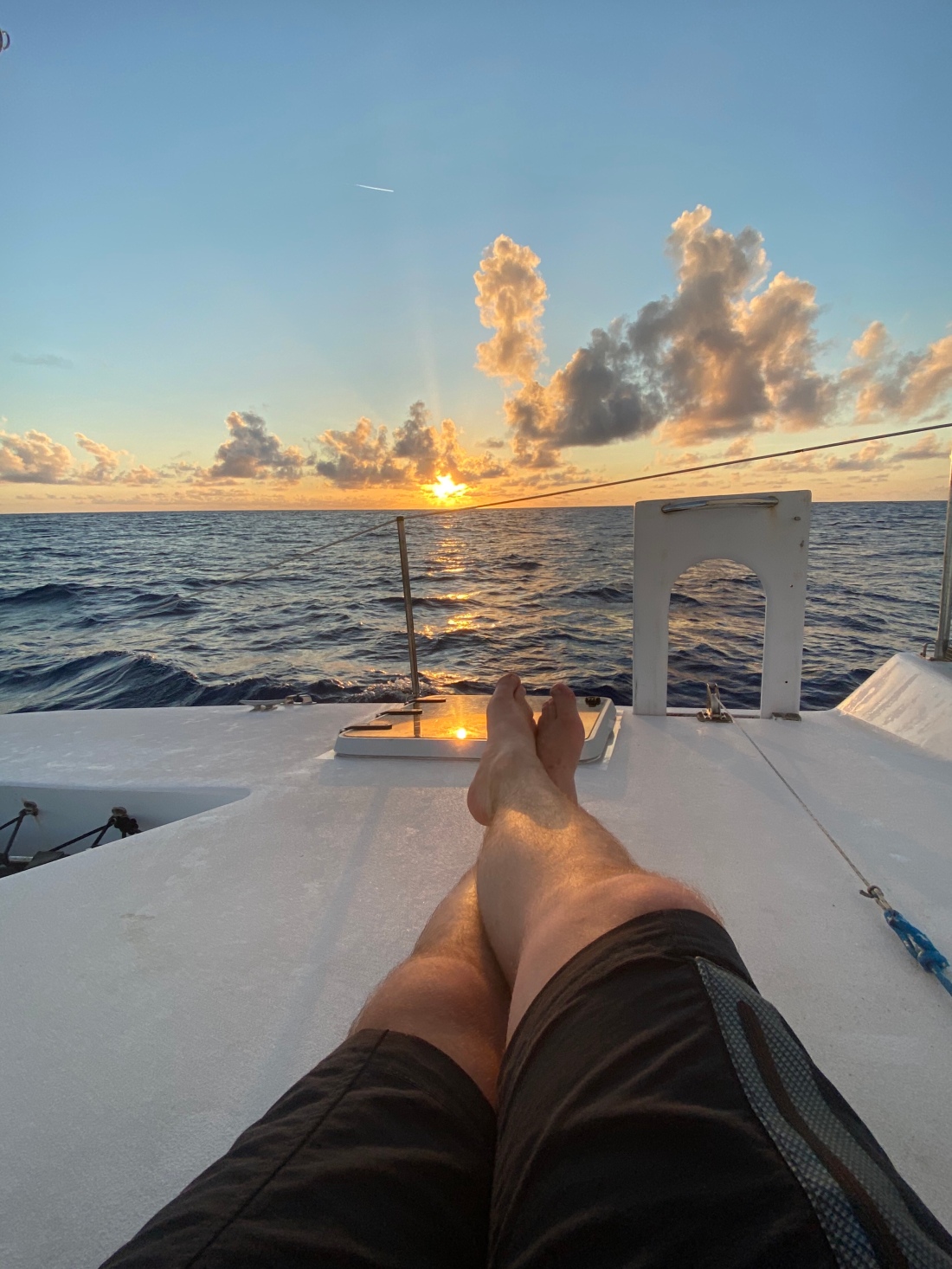 Tom managed to give our daily position report each morning on the Waterway Ham radio net and on SSB with Marine Weather Center twice daily for the latest weather report and weather routing suggestions. Long range radio provides an added level of communications and comfort for us and our families.

Our more direct course this year. Tom hit our top speed of 10.5 knots in a short squall.

Our comprehensive overhaul this past summer paid off. Tom discovered a worn soft shackle during his daily deck check. He modified the way the boom vang connects to the mast step to prevent future chafe. The only other minor difficulty was the engine wouldn’t start twice. Tom fixed it each time by bleeding air out of the fuel line. He might have left a little air in the lines when he replaced the primary fuel filter in Beaufort.

Eleuthera is a long skinny island that took most of the day to pass. We quickly connected all our electronic devices to our island WiFi hot spot. Ah the joy of being connected; while still at sea!

We arrived at Conch Cay Cut, the entrance into Exuma Sound and Georgetown at 3AM on Saturday, November 9th. Still quite dark, moon was setting just before we entered the narrow channel. Anita hand steered the remaining two hours to arrive at Sand Dollar Beach just before sunrise. After the anchor was down, bridle put on, and the sails covered Brian took this pretty picture of the pre-dawn sky. 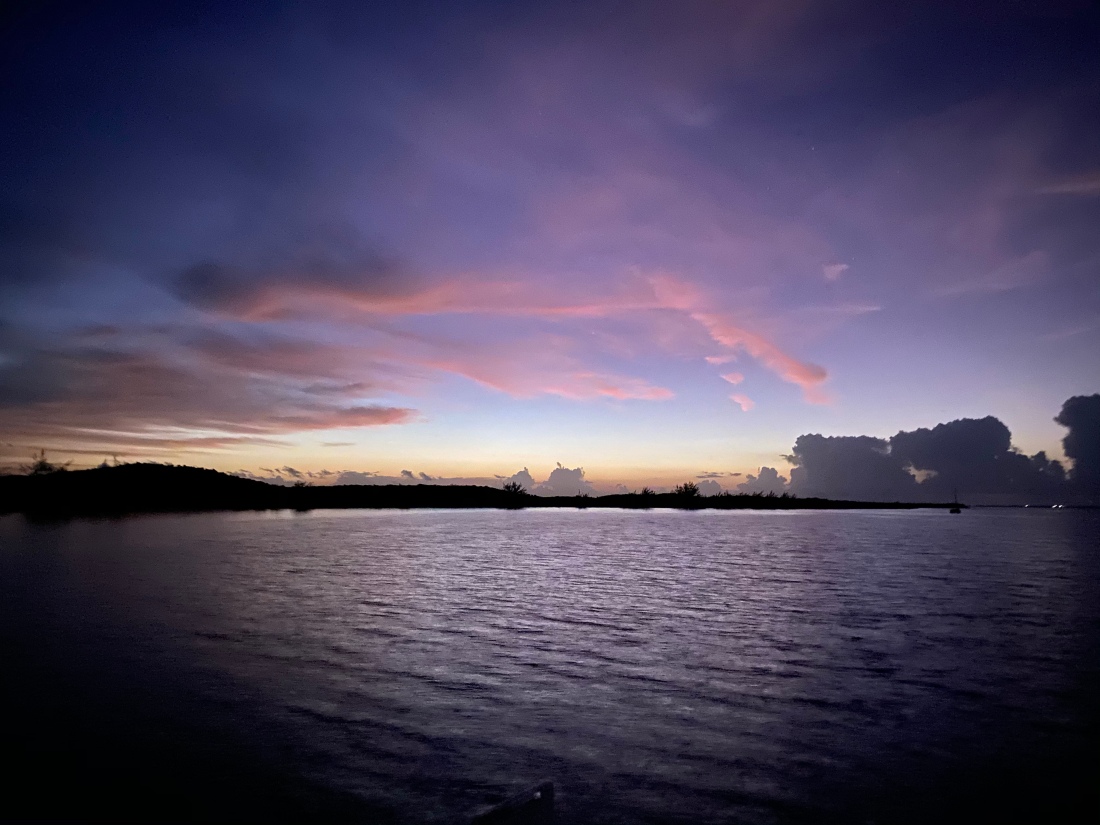 We all attempted to get some rest as we’d stayed up all night, but soon decided sleep could wait another day. Talked with family and sent messages and just admired the view! 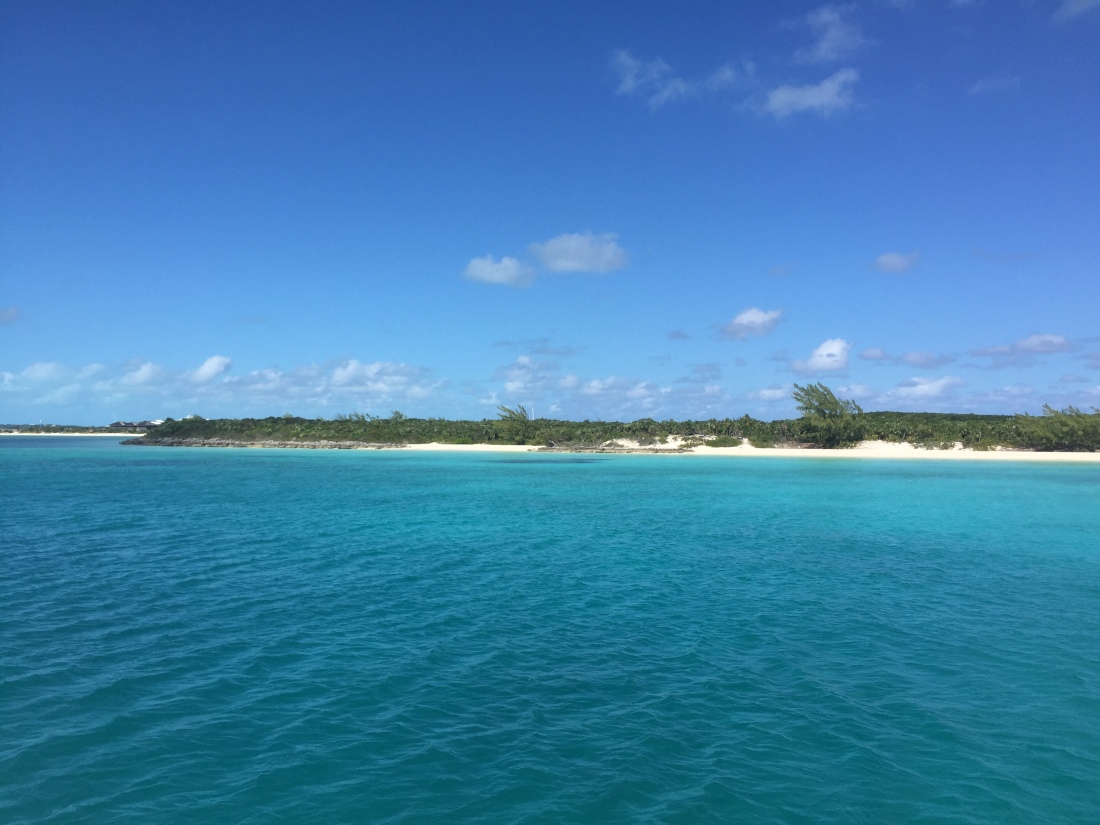 We sailed 740 miles in 6 days 19 and a half hours; motored less than 32 hours. Easy passage. It is 82 degrees for a high and 72 at night. Jimmy Buffets tune, “The weather is here, I wish you were beautiful” is constantly playing in our heads!

We motored over to Georgetown on Monday to check in with Customs and Immigration. Then took a tour of the town and a celebratory drink at the Peace and Plenty outdoor bar. Lunch at Jillian’s Jerk Chicken and Ribs, mmmm good!

Pictorial highlights of our walk around Sand Dollar:

Pudgy all alone on the beach 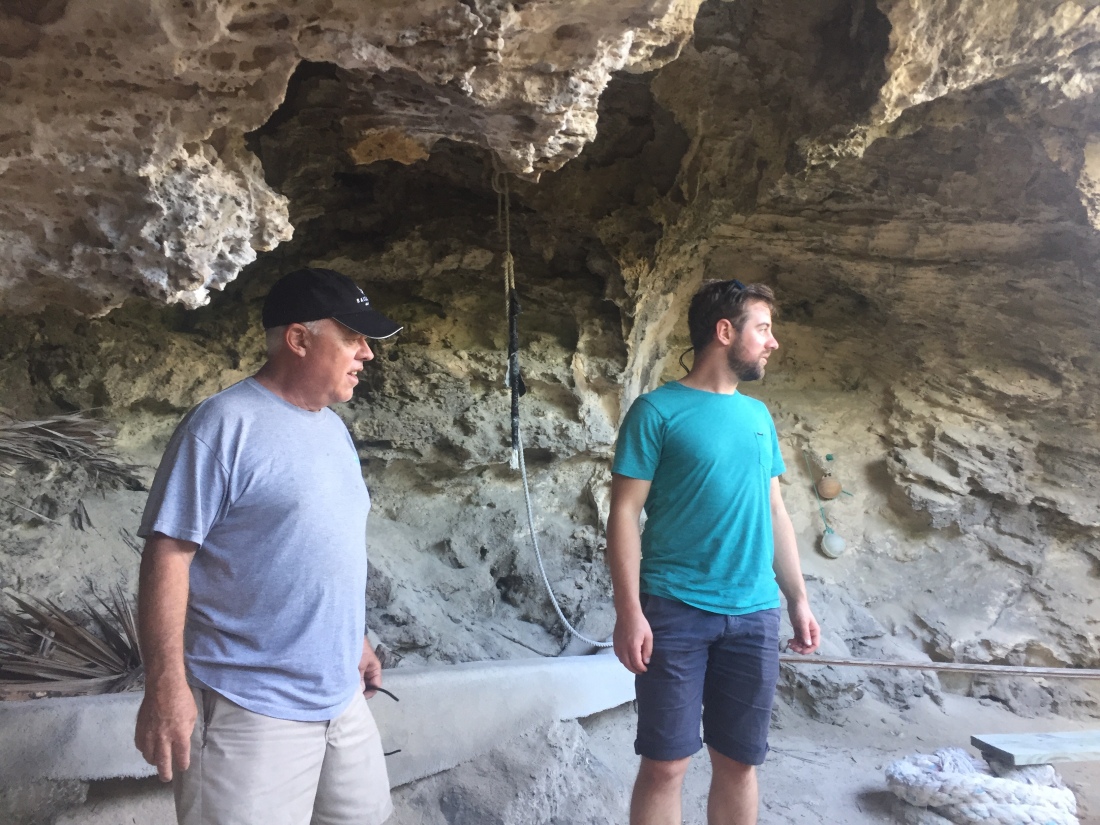 We found a cave 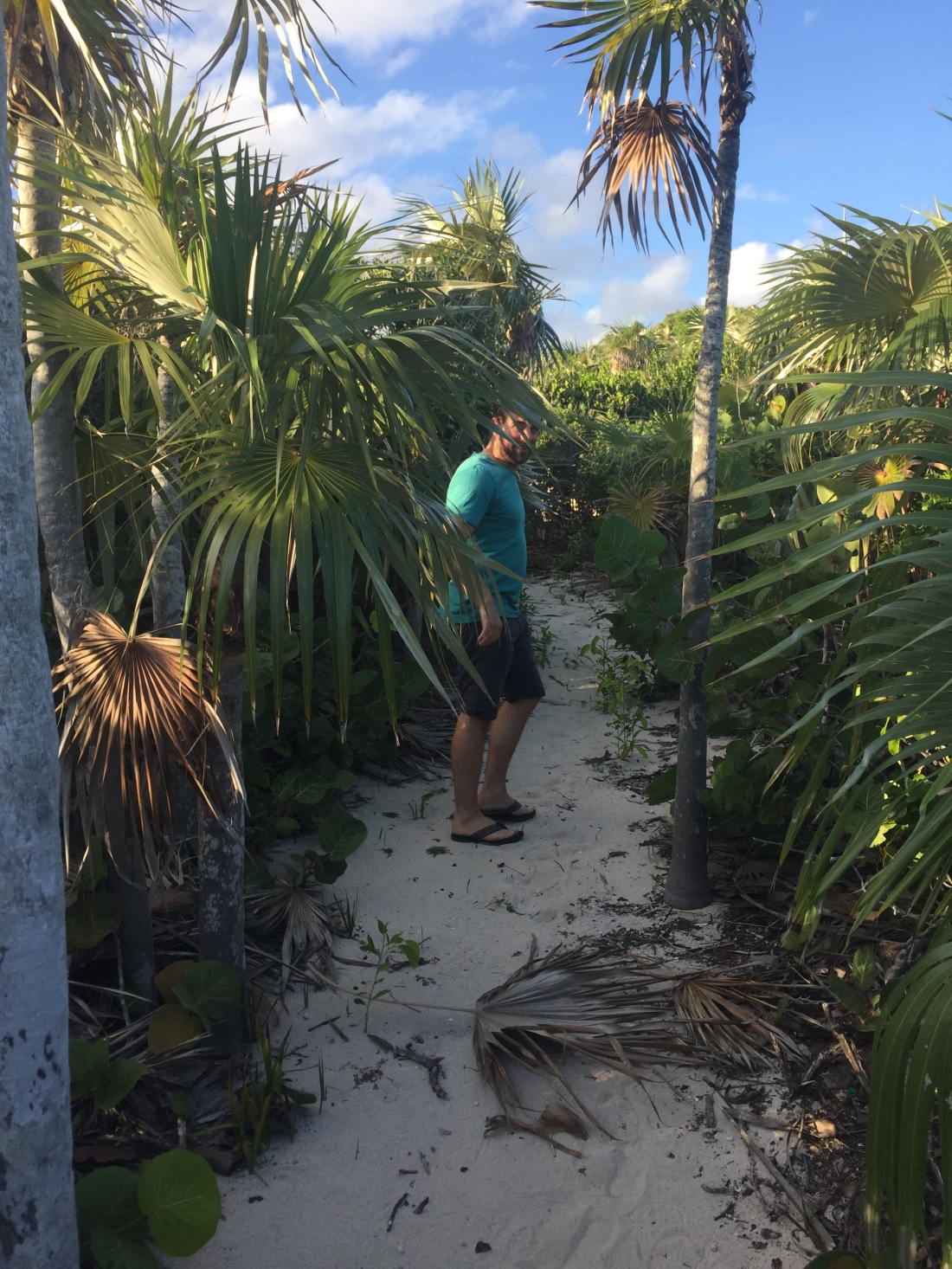 Path to the ocean 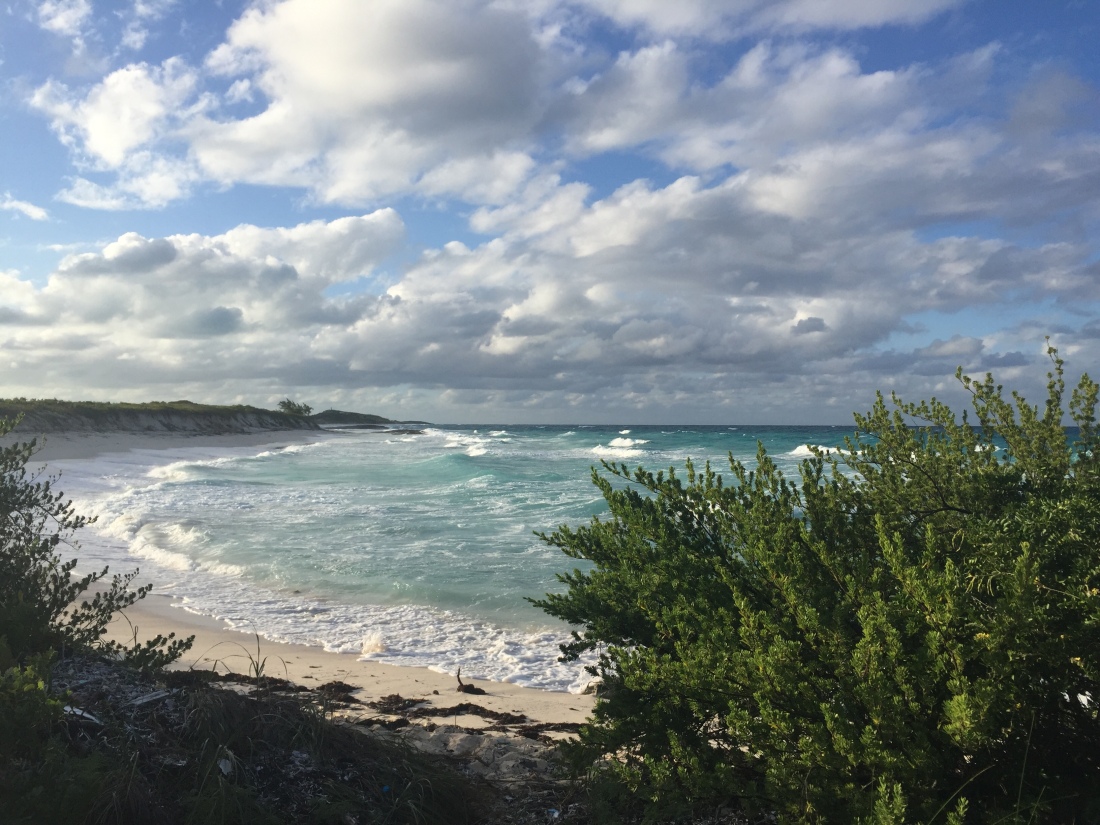 First view of the windward side of Stocking Island

On his last afternoon in the Bahamas, Brian rigged the Portland Pudgy and went sailing: 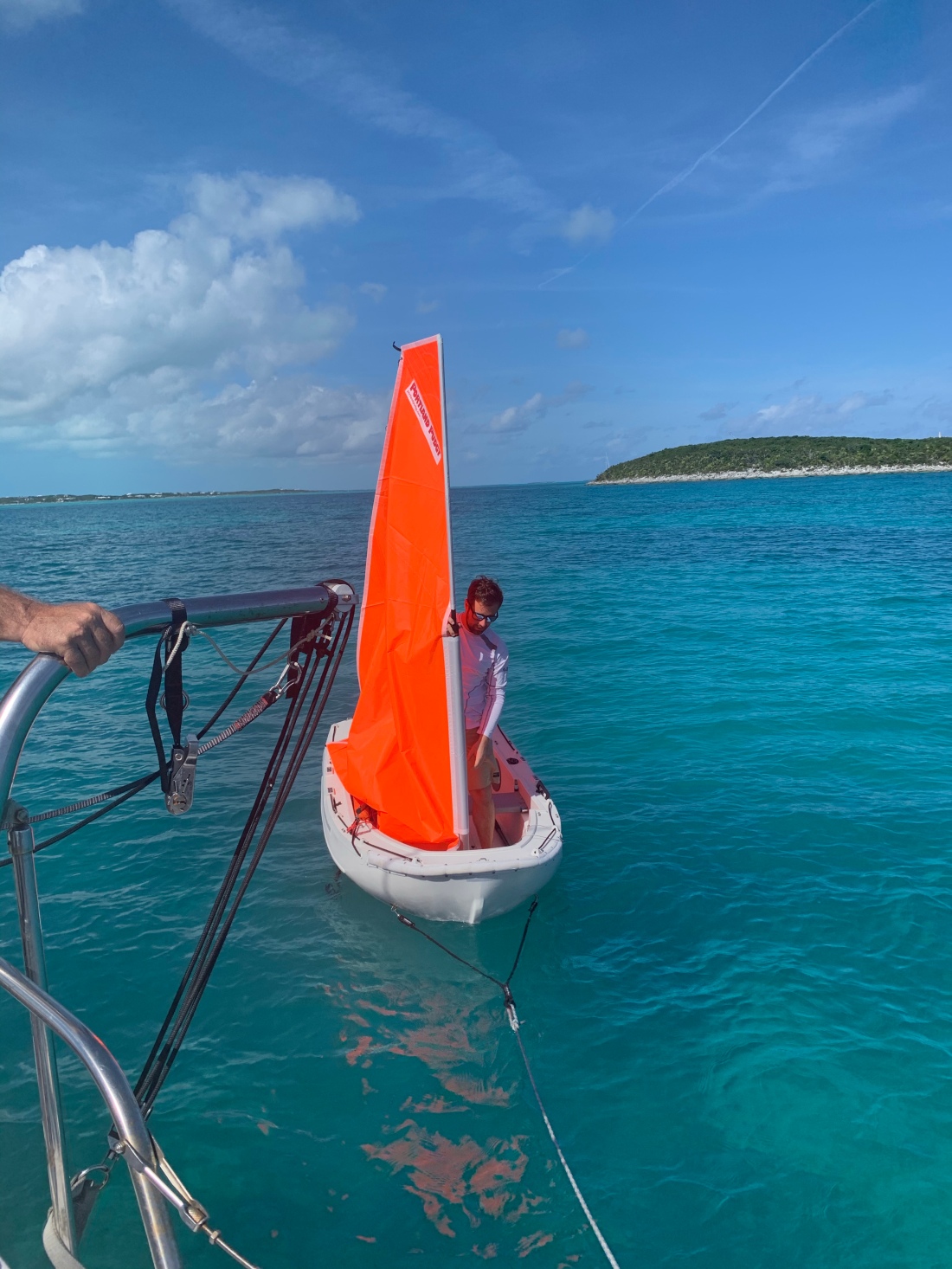 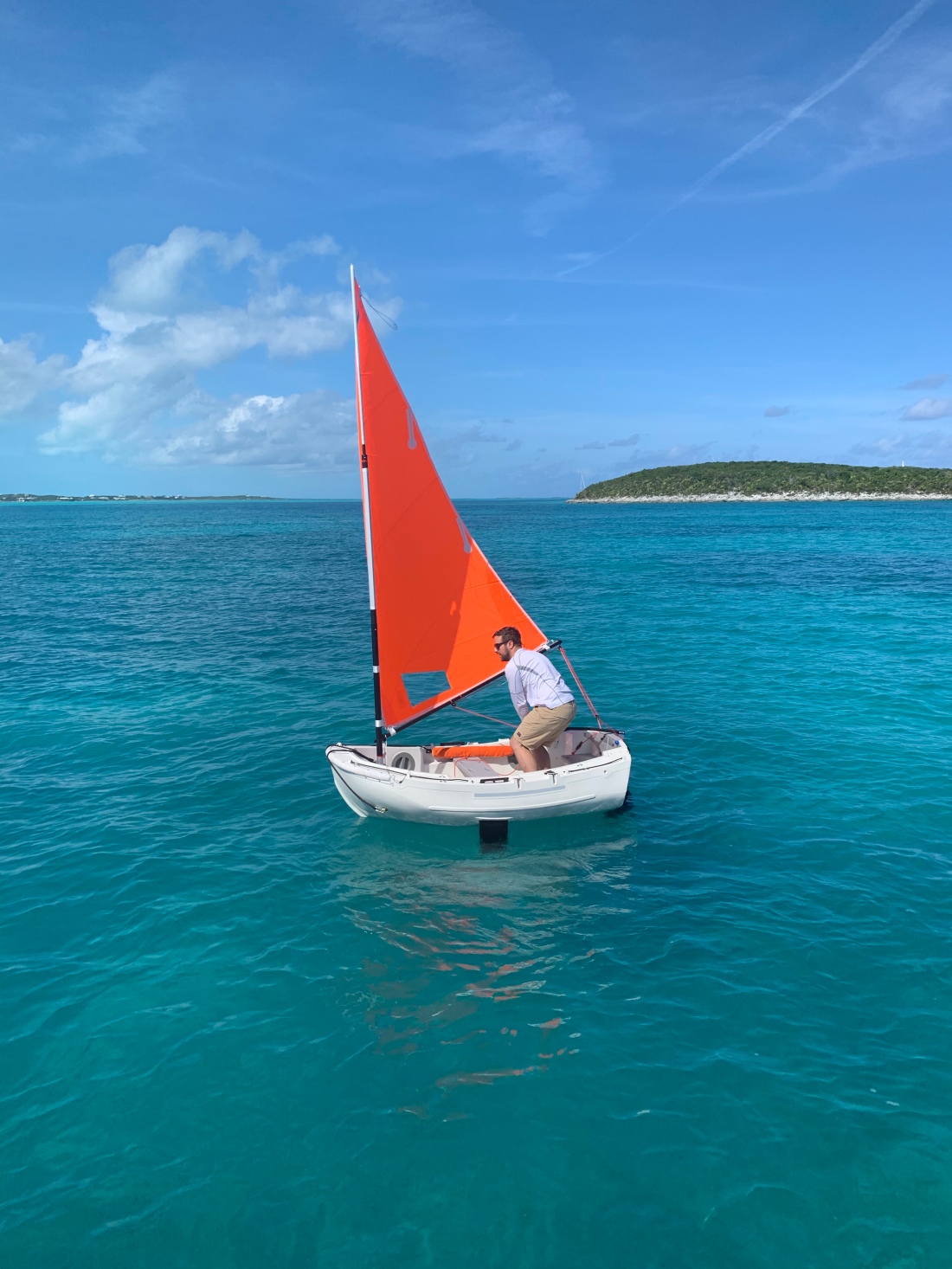 The winds were too light. Tom sailed too, but promises to try it again when there is more wind. All too soon we were saying farewell to our nephew and thanking him for sharing in this fabulous, memorable, and easy passage to a favorite winter island.

2 thoughts on “Easy Passage to the Bahamas 🇧🇸”